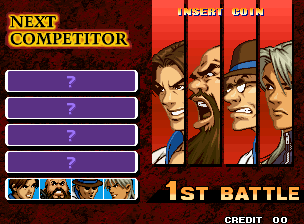 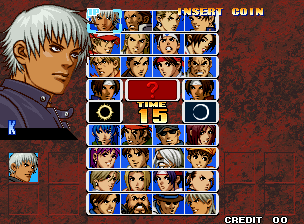 Score: 9 out of 10
The King of Fighters series is undoubtedly the most successful fighting series on the Neo Geo, and throughout the years the series has been getting better and better. The King of Fighters ’99 continues the series’ legacy of deep gameplay and on-going story. Graphically, the game improves over ’98 in a few ways. For one, the games characters are a bit more animated and have much more detail. The game’s backgrounds are the best in the series bar none; the level of color and intricate detail is astounding considering how old the Neo is. SNK out did themselves by animating things like airplane smog, rain in the park to the incredible final stage that has some impressive lighting effects. The only thing better than this in the graphics department is the brilliant Garou (which unfortunately us CD owners don’t have the privilege of getting), but even that game doesn’t seem to have the artistic detail of this game. Music has never seemed to be an important part of the King of Fighters games. While we will always remember the Psycho Soldier theme and the beautiful chant of 97’s Orochi team, music has always been second nature. Music has always been excellent for the action, but nothing to listen to while the game isn’t playing like Samurai Shodown II. Same goes for this version; the music is appropriate for the fighting, but nothing more. Sound fx are crystal clear; you’ll be able to hear every kick and punch as it hits your opponent. Now the gameplay, which is the deepest of any Neo Geo fighting game created (even Garou in my opinion). You now select teams of four characters, three will be your regular fighters and the fourth is a striker that appears at your whim to assist you in battle by pressing B+C. The striker can be used either offensively (even add more hits to your combo) or defensively. Another new feature is the ability to use your pow gauge to give your character an offensive (A+B+C) or defensive (B+C+D) edge. The catch is that once your time runs out in either mode, your character won’t have access to the pow gauge till they’re finished the match, very similar to the way the pow gauge was used in Samurai Shodown IV. Characters are still perfectly balanced making for excellent 2 player battles, and everything from special moves to the almost infinite number of 2-in-1 combos remain in tact. And for the lucky Neo Geo CD owners, an art gallery and demo gallery (where you’ll be able to view all the in game cinema for the teams once you go through them once in the game) have been added. We also get the standard team, team vs., single, single vs., and single all play modes, but unfortunately no survival mode is in this edition. Another downer is that the CD load times are a bit too long between battles, but the game is so good, it’s only a minor infringement on the gameplay; you’ll be able to turn the demos off anyway in the option menu so you can move through the game a little quicker. One really cool feature in the option mode is the ability to max out your pow gauge and available strikers. Whether you own a basic cartridge system or the CD system, this game is a give in, load times and all. The game is so much fun you’ll be playing for hours on end. Besides, this will probably be the last King of Fighters on the good ‘ol Neo Geo CD (my fingers are crossed for the 2000 version) so it’s a worthy investment. Definitely one of the best fighting games ever made. (Jon Paul, Pennsylvania) 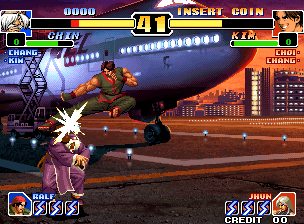