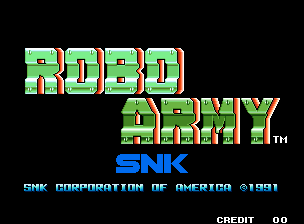 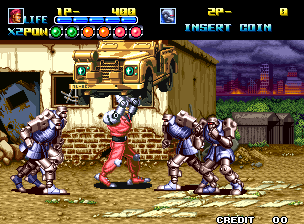 Score: 9 out of 10
For so many fighting games, it’s surprising that the beat ’em up genre never took off on the Neo Geo. Burning Fight and Sengoku 1 and 2 didn’t age well at all, and Sengoku 3 and Ganryu will never see the light of day on the CD system, and while Mutation Nation came very close, Robo Army probably ranks as the best game money can buy on the Neo CD. Graphically the gameplay is wonderful for its age, with large and well animated character sprites and detailed and interesting game levels. Sure there’s no complex scrolling or any junk like you’d see on Metal Slug 3 (god why can’t they keep making CD games!!! I sit through 2 minutes of load times each level for MS3!!!), but who can pay any attention why your busting enemy robots in the face with your metal arm. Music gets the gameplay pumping and the controls are tight (which was the problem with Mutation Nation). The game is a bit short but who cares, what’s here is fun and the 2 player is a blast to play. Robo ! Army 2 please??? 🙂 (Jabba Priest, Canada)

Score: 10 out of 10
This game has to be 1 of the best scrolling beat em ups on the Neo Geo CD System. First you have to chose your player, either be a marene cyborg type person, or a near totally cyborg person. And go around destroying veriuse robots, including fighting bots, flame throwing bots, aqua Bots and many animal form type bots like birds, dogs , spiders and even Gorillas. The game has some great levels too, including streets, sewers and even a police station. 2 level in the game include jumping rope to rope and collecting power ups while beating enemies. Pick ups include life and cars, barrels and even some robots fallen off limbs. Basically, the game is not one which you will get bored of fast and is a great compared to the likes of Burning Fight, Mutation Nation and even Sengoku. Its a all around smack and destroy fest, and with 2 players, it will be the most entertaining game you have played on your Neo Geo CD. (Jason Orme, United Kingdom) 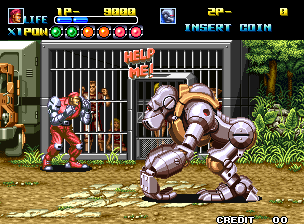 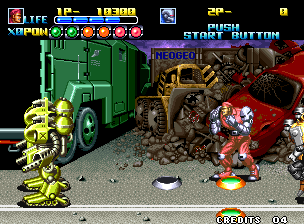